October 13th, San Diego, CA- U.S. Rep. Rosa DeLauro is calling for the FDA to pull the controversial birth control implant, Essure, from the market due to recent safety concerns and a citizen’s petition. 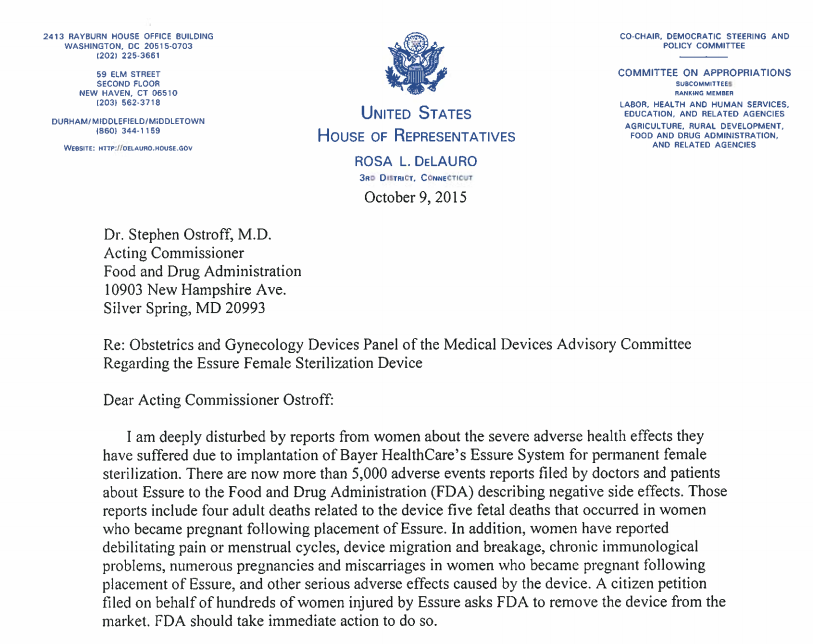 Essure is an implantable permanent birth control device that was originally developed by Conceptus, and bought by Bayer in 2013. The device consists of small nickel coils, which are covered by polyethylene terephthalate (PET) fibers. Essure was approved under FDA’s premarket approval (PMA) process in 2002, which makes patients suffering from the adverse effects of the device unable to sue the manufacturer.

When Essure was approved in 2002, the FDA required Bayer conduct two post-approval studies as a condition of approval. The FDA has collected more than 5,000 adverse event reports in its Manufacturer and User Facility Device Experience, or MAUDE, database. They say most of the reports were patient-generated.

The FDA also acknowledges four adult and five fetal deaths linked to Essure, although they caution that it’s difficult to confirm “whether a device actually caused a specific event…based solely on the information in a given report.”

In early 2015, a citizen’s petition was filed by the law firm Koch Parafinczuk & Wolf, PA, which gave renewed attention to Essure’s safety. In addition to citing adverse events that were reported related to Essure, the petition alleges clinical trial data used to support Essure’s approval was tampered with and that Bayer failed to disclose serious adverse events such as “perforations and migrations.”

After reviewing the petition, the FDA “determined that the request made … is a trade complaint,” which means they forwarded it to the Office of Compliance at the Center for Devices and Radiological Health (CDRH), where it will be investigated.

Mounting public pressure caused the FDA to announce it would hold a public advisory meeting to hear patient and expert testimony on Essure in order to make recommendations regarding appropriate device use, product labeling, and potential need for additional postmarket clinical studies.”

Following the testimony, the panel called on the FDA to update Essure’s label and require additional postmarket studies on the device. In addition, the panel suggested that “ongoing trials be reviewed to determine if data could be collected to address some of the topics of concern.” They also called for more data on potential allergic reactions to the nickel used in the device. The panel also suggested that Essure remain an option for “women who are not good candidates for laparoscopic or general surgery.”

On October 9th, U.S. Rosa DeLauro addressed a letter to Dr. Stephen Ostroff, the acting commissioner at the FDA. DeLauro called for Essure to be pulled from the market, alleging the device’s “benefits do not outweigh its risks.”

DeLauro also points out the growing number of adverse event reports related to Essure and the dangerous side effects reported by patients as cause to recall the device. DeLauro also shines a light to a Yale study that found Essure to be less effective at preventing pregnancy than tubal ligation.

In the letter, the U.S Rep. calls for the FDA to explain why patients were not given an opportunity to speak until the open public hearing portion of the meeting. DeLauro questions why experts like Dr. Aileen Gariepy, who worked on the mentioned Yale study, were not invited to present during the meeting, but instead were advised to “speak from the audience, rather than a lectern…with the other ‘experts.'” You can read the full letter to the FDA here.

In addition to DeLauro writing this letter to the FDA, Pennsylvania Congressman Mike Fitzpatrick is introducing the first bill involving Essure. If it’s passed, the “E-Free Act” would revoke the pre-market approval received from the FDA in 2002. That PMA currently protects Bayer from litigation, so women aren’t able to take legal action against the company.

It’s very positive news that members of Congress have stepped in to take action against this harmful device. We hope to see the FDA listen to these dedicated representatives and recall Essure from the market.